Economic crises and troublesome transitions from centrally planned to a market economy are the realities of present day Russia. While drastic economic reforms are under way, the problem of reorganization of agriculture and implementation of new approaches to technology and management of farming become more and more essential. These approaches require a reconsideration of management and marketing of agricultural products and the utilization of existing worldwide experience in agricultural technology and machinery. The analysis of the current situation in agriculture and rural areas is discussed along with prospects for future development, and rural energy and prospects of future development are discussed.

The situation in Russian agriculture after 8 years of economic reforms

The development process in Russian agriculture has been severely undermined by lack of money for investment, high inflation rate and decline in the output of agriculture and machinery industry.

One tractor is used 574 hectares (3 times more than in the year 1990) and one combine is used for 260 hectares (twice more than usual value). The total budget for machinery leasing during the last 5 years has been 1 billion dollars.

The agricultural sector consumes 7 million tons of diesel and 4 million tons of gasoline annually. The energy investment in Russian agriculture is 2 — 4 times greater than in the Western Europe, while the productivity of labor amounts to only 10 % of the West Europe level (Table 4, 5).

The service of machinery and technology stations is 2-2,5 times more expensive than the cost of service provided by the farmers themselves.

82 % of agricultural enterprises have losses as the result of their activity. One reason of poor economical situation is price disparity. For last 6 years the prices for industrial goods increased by 84000 times, for energy and fuel by 15000 times (Table 6) and for agricultural products only by 1700 times.

The farmer has to pay 664 tons of grain in order to buy a new Russian grain combine DON-1500.

The production cost of beef for farmer is 27,5 % of market price, for pigs 50 %. The losses of agriculture due to the price disparity are 300 billion rubles (approx US $15 billion). This money was taken from agricultural sector and distributed to other sectors of Russian industry.

Another reason of poor economic situation in Russian agriculture is low (1 %) state subsidy to Russian farmers, compared with total 45 % (direct and indirect) subsidy to agricultural sector in Europe. (Romanenko G. A et al., 1999).

The year 1999 was the first year of stabilization and revival of agricultural production. 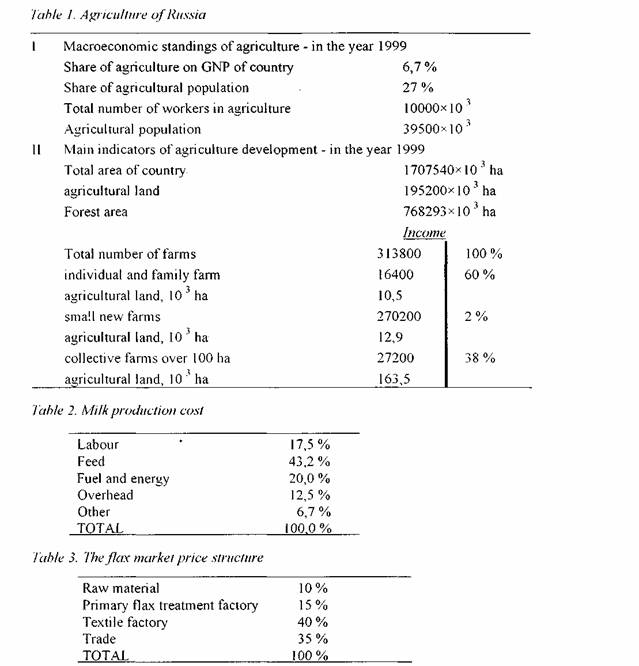 The main trends in development of Russian agriculture are as follows (Strebkov D. S., 1996):

Substantial decrease of gross output of agricultural production due to soil erosion decline of soil fertility, neglible state support, inefficient management and due to climatic change, resulting droughts in cereals and potatoes-growing areas;

Rapid increase of fuel and energy prices and direct and indirect energy expenditures;

Rates of production growth are behind the rates of resource consumption growth;

The understanding of the need for urgent measures to improve the living standards of people in rural areas, to reduce the consumption of fuel and energy and to protect the environment;

Large scale leasing of machinery for farmers and agricultural firms;

Development of new federal and regional systems of technologies and agricultural machinery considering the transition to market economy;

Creation of machinery and technology stations for rendering services and effective use of agricultural techniques;

Utilization of existing worldwide experience in agriculture technology and management including international and bilateral co-operation.

The status of rural energy

The total consumption of energy in agriculture of the Russian Federation amounts to 83 million tons of coal equivalent (tce) or to 113 million tce with the local sources wood and peat taken into account, in other words, to 10 % from the total amount of energy consumed in Russia. Agricultural production consumes some 47 %, housekeeping and services — 53 % (Fig. 15). 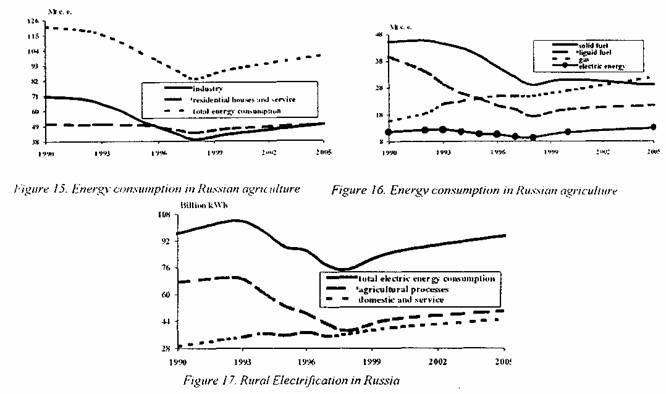 Rural electrification levels across Russia vary widely: in some regions there are densely populated communities which have a deficiency of power while in other regions the most pressing need is to electrify dispersed, isolated villages or homes.

About 70% of the Russian territory with rural population of more than 10 million people does not have a central energy supply. Forty million rural inhabitants of Russia lives in the grid connected areas, they consume annually 75 billion kWh, this is about 8,8 % of the annual electric generation in the country. The electric power consumption is 6600 kWh per capita. This is about halting that in other sectors of industry.

Management inefficiency, high line losses and unreliable service characterize the utilities in many regions (Strebkov, 1997). This poses a significant obstacle to satisfying rural power needs. Diesel generators have been widely deployed in remote areas because of their relatively low initial costs. However, these generators often operate inefficiently; the fuel itself is costly and deliveries are unreliable due to poor road conditions; the diesel generating-sets (spell out) require regular maintenance, which is often unavailable; and they produce harmful emissions. Motor fuel in remote regions of Siberia and North territories is very costly — 0.5-0.9 US $/kg and electric energy price is 0.16-0.32 US $/kWh.

With the costs of power and fuel resources drastically increasing, the application of the former power supply principles in relation to private farms in financial terms of market relations makes the activities of such farms downright unprofitable.

In connection with the poor economic situation in Russian agriculture the application of the existing world-wide experience in power supply of private farms may be regarded as most essential to utilize all the energy saving methods available, as well as to offer the Russian farmers information on all promising developments in this field.

1. From 1991 to 1999 Russian agriculture was in deep crisis losing 50 % of gross output. As the
result of drastic economic reforms the great majority of farms have been brought down to the
brink of bankruptcy. The year 1999 was the first year of stabilization and revival of agricultural
production.

There are three main reasons for the crises:

• imbalance between relatively low prices for agricultural products and high prices of machinery and energy. This is caused by unsatisfactory and undeveloped market economy,
state control and poor financial management

•    insignificant government subsidy to the farmers

•    the absence of extension and consulting service.

2. The expenses of energy in Russian Agriculture are 2-4 times greater than in the West, while
the productivity of labor amounts only 10 % of the West Europe level.

3. Russian energy losses are enormous and irrecoverable. Energy saving potential is one third of
the total volume of consumed primary resources. A new agriculture and energy policy is very
important for sustainable development in Russia, for improving of environment and for decreasing
the dependence on food import. New agricultural and energy technologies play a major role in
the all fields connected with sustainable development. Russia recognizes the need for mutually
advantageous international co-operation in which the vast scientific technological and resources
potential of Russia can be brought into play.

Romanenko G. A., Tjutjunnikov A. I., Shutkov A. A. Scientific Potential of Agro-industrial complex of Russia. Russian Academy of Agricultural sciences. Moscow, 1999, 485 pp.